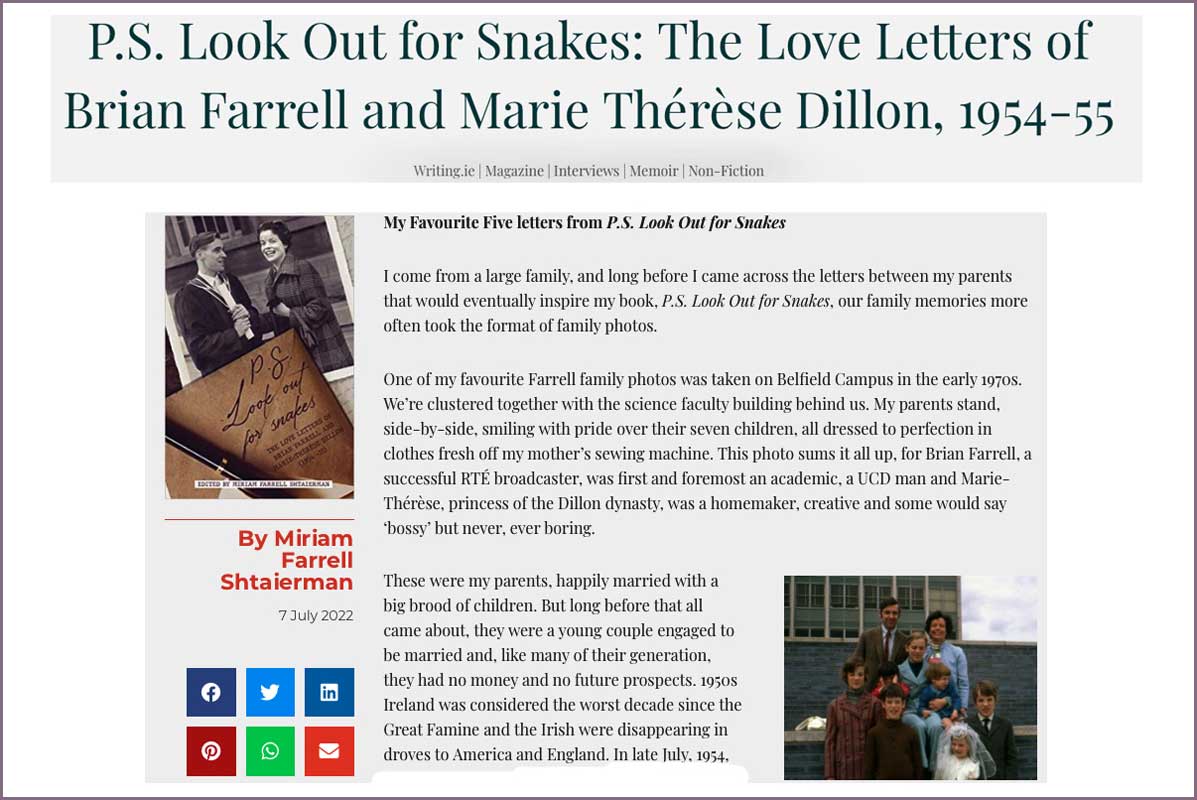 This week Ireland’s premier writing website, Writing.ie published an article by author Miriam Farrell-Shtairman on her five favourite letters featured in the book. Read the full text below:

Text of the article, by Miriam Shtaierman:

My Favourite Five letters from P.S. Look Out for Snakes

I come from a large family, and long before I came across the letters between my parents that would eventually inspire my book, P.S. Look Out for Snakes, our family memories more often took the format of family photos.

One of my favourite Farrell family photos was taken on Belfield Campus in the early 1970s. We’re clustered together with the science faculty building behind us. My parents stand, side-by-side, smiling with pride over their seven children, all dressed to perfection in clothes fresh off my mother’s sewing machine. This photo sums it all up, for Brian Farrell, a successful RTÉ broadcaster, was first and foremost an academic, a UCD man and Marie-Thérèse, princess of the Dillon dynasty, was a homemaker, creative and some would say ‘bossy’ but never, ever boring. 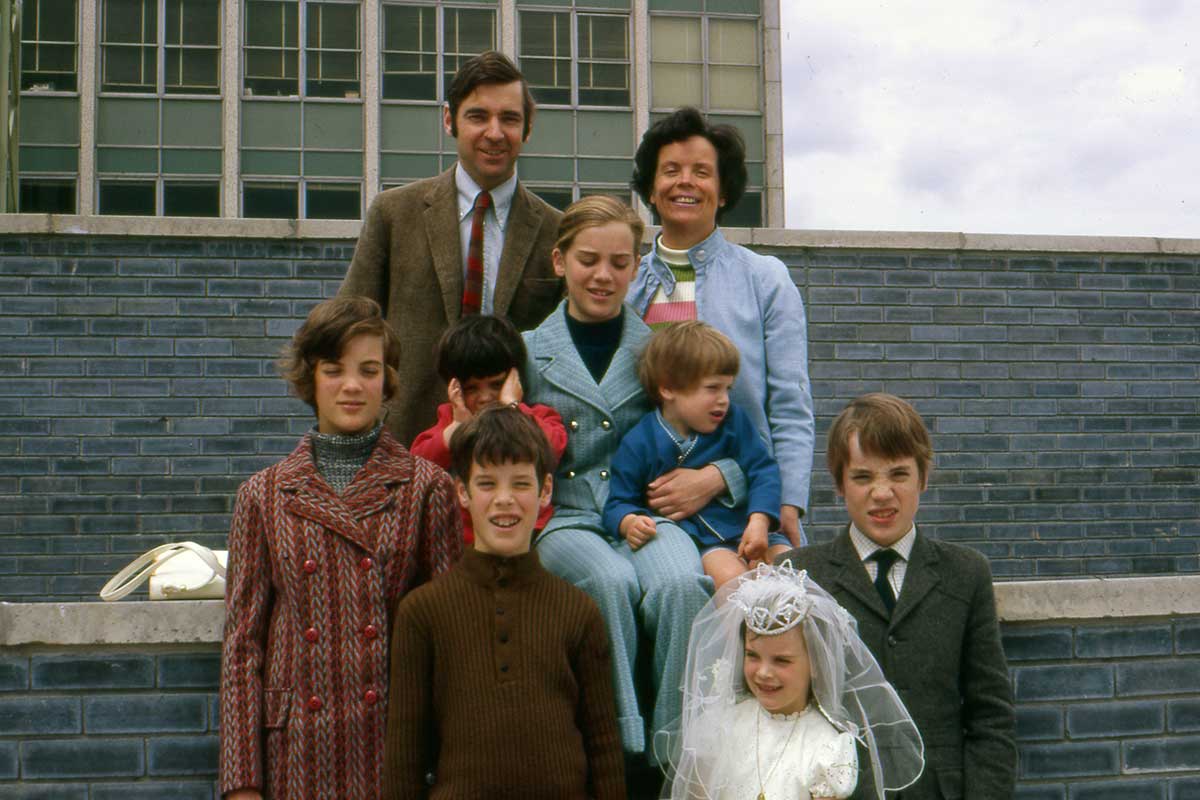 These were my parents, happily married with a big brood of children. But long before that all came about, they were a young couple engaged to be married and, like many of their generation, they had no money and no future prospects. 1950s Ireland was considered the worst decade since the Great Famine and the Irish were disappearing in droves to America and England. In late July, 1954, Brian nearly disappeared too, when he won a scholarship to complete his Masters at Harvard. Despite serious misgivings, Marie-Thérèse recognised a God-given opportunity and encouraged him to go.

It was that time apart that spawned the fascinating correspondence that would eventually appear in my father’s papers, years later.  Once I’d found the letters and read their richness and passion, I knew I had to put them in book form.  Not only did they reveal the love my parents had for each other, but they also provided a broad-reaching account of a challenging time in Irish history.

Editing the collection was one of the most rewarding things I’ve done, and publishing P.S. Look out for snakes (the title is from one of the letters) was even better, when it was launched in March at MoLI in Dublin, and reviewed favourably in the press.

It’s hard to pick out my favourite letters among those that came to light, especially having narrowed down the selection for the book.  But if I were to pick five of my favourite missives, they would probably be those that follow.

In her first letter, Marie-Thérèse writes:

“I’m so excited, as if I were going too! Maybe in a way I am! Everything you feel, I feel, and I know I’ll see some of the wonderful things through your eyes. Take great care of yourself. Don’t trust many – they aren’t all as honest as yourself! (that I feel is a weak argument!)”.

Brian didn’t disappoint her. He was a good observer and an even better writer: his descriptions of the new world are vivid and futuristic considering the times he lived in. On the 11th August, 1954, he wrote to his fiancé: 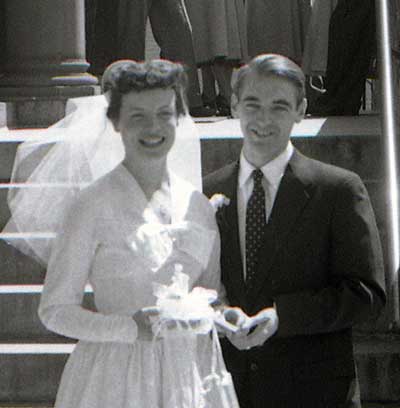 “We then went to IBM – a very well-known American firm which makes electronic brains (none there now, though), accounting machines, and electric typewriters. We had a picnic lunch in the grounds of their country club – a fabulous place – dance hall, swimming pool, recreations of all kinds, restaurants, lounges etc. It is all set in lovely surroundings. Unfortunately, IBM is one of the ‘paternalistic’ business places where the president calls people by their Christian names and gives them everything to make them contented and happy and leave them no soul of their own. The plant was very fine, but dotted all over (even in the lavatories) with notices saying ‘THINK’; as someone said, all very 1984-ish and straight out of Huxley’s Brave New World.”

Marie-Thérèse wrote mainly about the familiar; family, friends, Dublin – all in her own colourful, humorous style. In September, 1954, she goes for a drive with Sheila Coakley (an old school friend):

“Sheila’s a terrible driver! We went to Bray via Killiney village. The homeward road was hectic because Sheila had obviously never driven in the dark and couldn’t judge distances. We called into a ‘ye oldy worldie’ place in Stillorgan village for coffee, and then Sheila’s car decided it had found a home-from-home and wouldn’t leave. Finally, after taking half a gate with it, we got going. Later, Sheila and I were reminiscing about the last time we went anywhere by car together: Sheila was driving us to Michael’s cottage 3 or 4 years ago. We were lost in the Dublin Mountains, passing through a hamlet at top speed. Sheila said to me: ‘What’s the name of this place? Can you read that notice?’ I replied confidently: ‘Yes, it’s called Bonified’ – I’ve certainly told you that one before.”

The reference is to the legal loophole which allowed a ‘genuine’ traveller to partake of alcohol three miles from his home at, what were termed, ‘Bona Fide’ houses.

Each letter provides a snapshot into a past time, so different from today, with so many delightful details.  In Boston, Brian stayed in a YMCA where “the room costs $1.85 and is very comfortable. They have a lovely snack bar where a double egg, rashers and coffee plus hot buttered (yes, butter!) toast and an ice cream cost me about 5/6.”  At the end of the same letter, he writes, “Outside in the street the taxicabs (in bright yellows, checks, reds and blues) literally crawl along each curve in an apparently unending queue, and so do my tired thoughts crawl out to you, my dearest.” 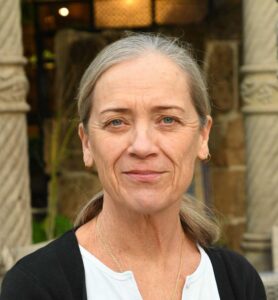 Considering the times they lived in, there is a gentle, loving intimacy between them, that “no ocean, or distance can affect” Brian reassures her, “because we’re something very special and wonderful.” And Marie-Thérèse agrees wholeheartedly: “I love everything about you – your love of your subject, your ambition is my ambition – then I suddenly realised that some silly fortune-teller who told me I would marry for ambition wasn’t far wrong! Because in those days ‘getting on’ meant big cars, big houses and money – whereas to me, it means a contented mind, for both of us – it means you gaining the respect and admiration of all you meet and know of you and a future to which God only will set the bounds of success – I can hear you say: ‘she doesn’t want much!’ but you wait and see – it will all happen.”

And it did.  Brian and Marie-Thérèse were married in Boston on the 11th April, 1955 and then returned to Ireland to start their life together. Their letters are testimony to an enduring love-story set in a past time: a time when letters found you no matter how far you strayed; a time when people wrote ‘stories’ about their friends, family, news-of-the-day, jokes and  most of all love.

This time is gone and may never return, but the letters will always remain.  The beauty of my being able to edit the correspondence between my parents means that now, their own take on those times is captured between covers and available for others to enjoy.