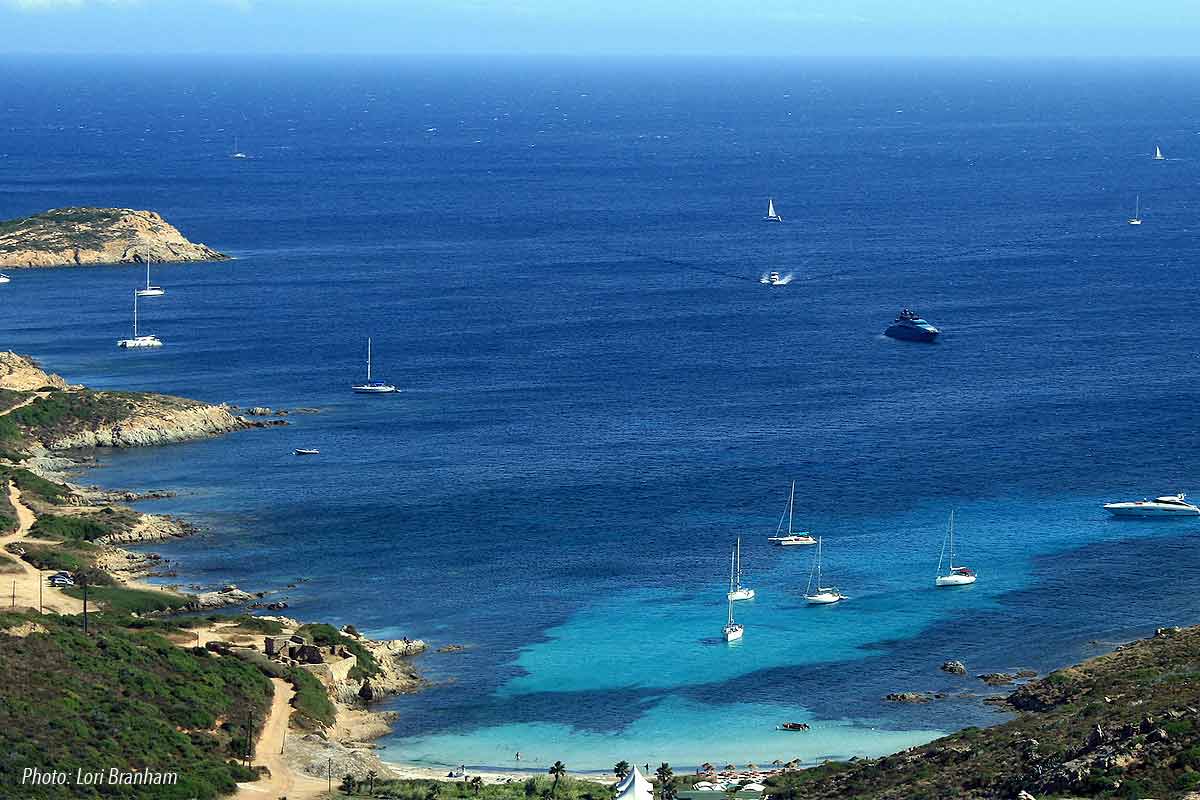 It is true what they say in the travel brochures. Corsica is indeed an aromatic isle. Fortunately my sense of smell was in good form as we stepped off the plane at the little airport of Calvi, because, apart from the blessed heat, what hits you first is the intoxicating smell of the masochia, the carpet of aromatic bushes which covers most of the island – rosemary, thyme, sage, garlic and God knows what else. We had picked a little hotel just south of the delightful port of Calvi, on the north-west coast of the island, for a restful, vegetative holiday in the last half of June, and that is what we got, but Corsica is also a place for the adventurous.

Basically, the island is jagged green mountains, slashed by valleys, running down to the blue sea, there are fine beaches on the northwest coast, stretching north from Calvi to just beyond Ile Rousse, but I must say I preferred the smooth rocks in a little cove just south of our hotel, where one could snorkel spectacularly over huge boulders that some primeval disturbance had hurled into the sea, and commune with the many varieties of fish that swam around them.

Another basic aspect of any lazy holiday, apart from sun and sea, is food and drink. Here Corsica is interesting, though not exceptional. A typical Corse menu might comprise a hearty bean soup (excellent, but the victim of sundry ribald remarks), a fish soup, wild boar paté, a warm goat’s cheese salad, or what came to be termed in our circle ‘coarse crudities’ (in effect slices of well-smoked ham and sausage with raw vegetables); then an equally hearty lamb or veal stew, with olives, peppers and so forth (lovely grilled fish, too, is available, but expensive); and a pleasant cheese-cake, served warm, or various cheeses, of sheep and goat. The wines are not going to take the world by storm, but a top red wine from the Patrimonio region near St Florent (to the north of us) is not at all bad, and the sweet Muscat or Cap Corse fortified wines make a pleasant aperitif, over ice. There are also various liqueurs, concocted from various elements of the masochia, which are of different degrees of vileness.

As I say, this was a lazy holiday, but if one wishes (which we did not, especially as the thermometer crept towards 100 degrees), one can head up from just above Calvi, either from the little mountain village of Calenzana, or from the Forét de Bonifato, and back-pack clear across the island, on well-marked trails. It will take you about 15 days, I understand, and is best done in late spring – when the snow is gone from the lower elevations, and before it gets uncomfortably hot. The wild flowers are luxuriant, and the views breath-taking. We visited the Forét one morning, and viewed various knobby-kneed enthusiasts setting off up the trail, but we were not tempted. Just too strenuous.

Corsica is an odd place in many ways, if one considers its history. Various distinguished visitors can be found who have praised it over the centuries, including Boswell and Balzac, but in general, from Greek and Roman times on, it was regarded as the back of beyond, and a suitable place to which troublesome persons might be exiled. The Corsicans themselves have always been extremely troublesome, both to each other and to whatever outside power – Greeks, Romans, Arabs, Pisans, Genoese and finally (from the late 18th century) French – tried to take them over. They have had brief moments of independence, but generally they have been engaged in guerilla warfare against some oppressor or other. And they are still at it. But they do not, it seems, shoot tourists. If one wishes to travel outside Calvi, one amusing thing to do is to take the little railway to Ile Rousse, just 20km up the coast, which it reaches in the best part of an hour, chugging along rather shakily, and stopping at all the little resorts on the way. It is very much the West Corsica Railway (Es-tu prêt là, Michel, es-tu prêt?). One does not actually have to get out and push, and no cows got onto the line, but if one had, it would not have been at all surprising.

The road system is still fairly primitive, by all, except Irish, standards. I was burdened with ladies who do not like precipitous drops and hairpin bends, so there was a limit to what one could do in the way of visiting charming little mountain villages, but we did take a car to drive across the island to the east coast, on the one reasonably good road, to visit the site of the Roman town of Aleria, which was of some interest to me. Actually, the most spectacular antiquities of Corsica are not Roman, but prehistoric – possibly erected by the same fellows as gave us passage graves and dolmens. Most remarkable are stone statues of warriors, rather like the Easter Island ones, and rows of standing stones, chiefly in the south of the island, going back to about 3000 BC. Well, taken all in all, is Corsica an island paradise? I should say it is a pretty good candidate for the title, but ideally in the late spring or early summer. The place fills up unbearably in July and August, I understand, and it just gets too hot – though relieved, I believe, by the occasional thunderstorm.