Sunday Independent Review of PS Look out for snakes 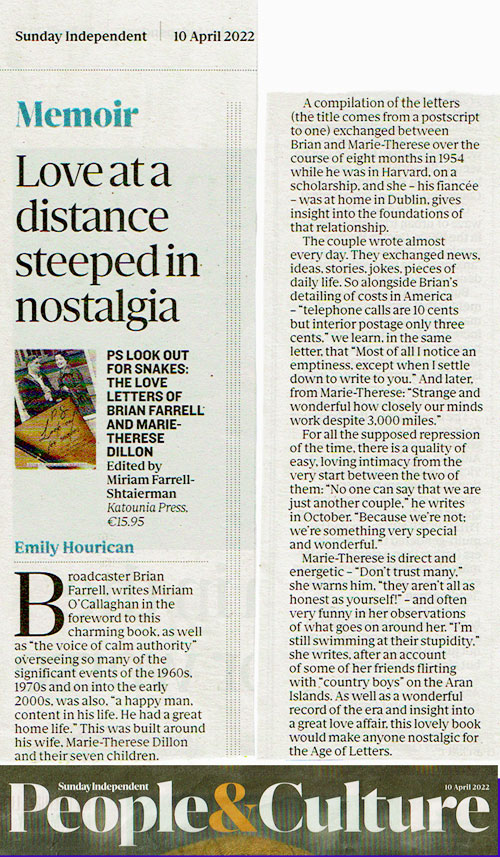 A fine review today in The Sunday Independent newspaper of PS Look out for snakes.  Reviewer Emily Houricane notes that  “As well as a wonderful record of the era and insight into a great love affair, this lovely book would make anyone nostalgic for the Age of Letters.” Click here, or on the image to see the live online review, or read the full text below.

Text of review by Emily Houricane:

Broadcaster Brian Farrell, writes Miriam O’Callaghan in the foreword to this charming book, as well as “the voice of calm authority” overseeing so many of the significant events of the 1960s,1970s and on into the early 2000s, was also, “a happy man, content in his life. He had a great home life.” This was built around his wife, Marie-Therese Dillon and their seven children.

A compilation of letters (the title comes from a postscript to one) exchanged between Brian and Marie-Thérèse over the course of eight months in 1954 while he was in Harvard, on a scholarship, and she his fiancée was at home in Dublin, gives insight into the foundations of that relationship. The couple wrote almost every day. They exchanged news, ideas, stories, jokes, pieces of daily life. So alongside Brian’s detailing of costs in America  “telephone calls are 10 cents but interior postage only three cents,” we learn, in the same letter, that “Most of all I notice an emptiness, except when I settle down to write to you.” And later, from Marie-Therese: “Strange and wonderful how closely our minds work despite 3,000 miles.”

For all the supposed repression of the time, there is a quality of easy, loving intimacy from the very start between the two of them: “No one can say that we are just another couple,” he writes in October. “Because we’re not; we’re something very special and wonderful.”

Marie-Thérèse is direct and energetic- “Don’t trust many,” she warns him, “they aren’t all as honest as yourself!”- and often very funny in her observations of what goes on around her. “I’m still swimming at their stupidity,” she writes, after an account of some of her friends flirting with “country boys” on the Aran Islands. As well as a wonderful record of the era and insight into a great love affair, this lovely book would make anyone nostalgic for the Age of Letters.