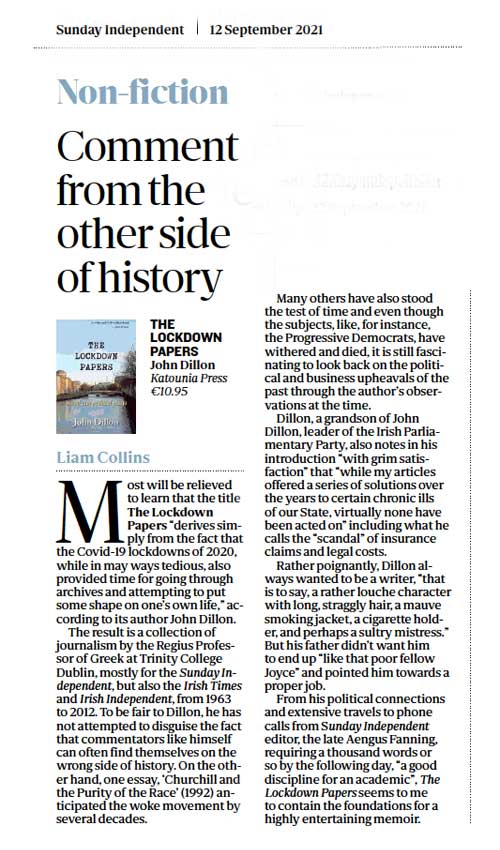 Great to see this fine review of The Lockdown Papers, which appeared in the Sunday Independent recently.  Reviewer Liam Collins notes that many essays “stood the test of time” and that they laid “the foundations for a highly entertaining memoir.”  Click here, or on the image to see the live online review, or read the full text below.

Comment from the Other Side of History – review by Liam Collins

Most will be relieved to learn that the title The Lockdown Papers “derives simply from the fact that the Covid-19 Lockdowns of 2020, while in may ways tedious, also provided time for going through archives and attempting to put some shape on one’s own life,” according to its author John Dillon.

The result is a collection of journalism by the Regius Professor of Greek at Trinity College Dublin, mostly for the Sunday Independent, but also the Irish Times and Irish Independent, from 1963 to 2012. To be fair to Dillon, he has not attempted to disguise the fact that commentators like himself can often find themselves on the wrong side of history. On the other hand, one essay, ‘Churchill and the Purity of the Race’ (1992) anticipated the woke movement by several decades.  Many others have also stood the test of time and even though the subjects, like, for instance, the Progressive Democrats, have withered and died, it is still fascinating to look back on the political and business upheavals of the past through the author’s observations at the time.

Dillon, a grandson of John Dillon, leader of the Irish Parliamentary Party, also notes in his introduction “with grim satisfaction” that “while my articles offered a series of solutions over the years to certain chronic ills of our State, virtually none have been acted on”, including what he calls the “scandal” of insurance claims and legal costs.

Rather poignantly, Dillon always wanted to be a writer, “that is to say, a rather louche character with long, straggly hair, a mauve smoking jacket, a cigarette holder, and perhaps a sultry mistress.” But his father didn’t want him to end up “like that poor fellow Joyce” and pointed him towards a proper job.

From his political connections and extensive travels to phone calls from Sunday Independent editor, the late Aengus Fanning, requiring a thousand words or so by the following day, “a good discipline for an academic”, The Lockdown Papers seems to me to contain the foundations for a highly entertaining memoir.