Review: The Diary of Elizabeth Dillon 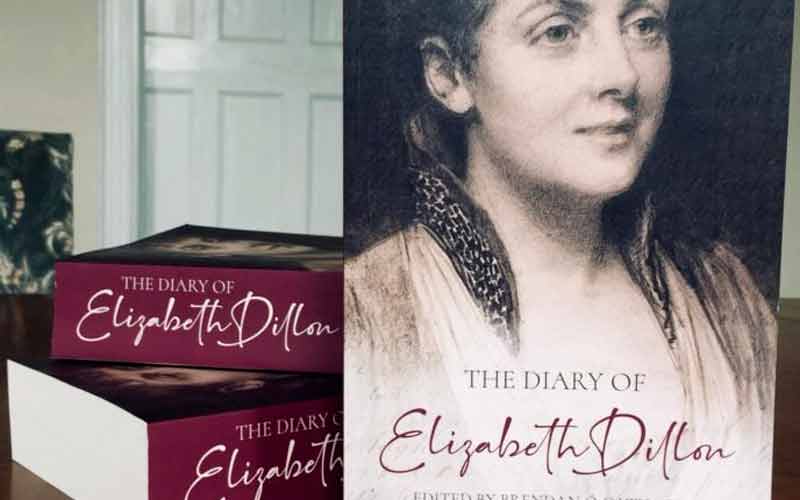 The Diary of Elizabeth Dillon: A Gateway to the Otherness of the Past

Read the original review on the Dublin Review of Books website here:  https://www.drb.ie/essays/a-coming-of-age

I must confess at the outset a certain personal interest in and connection with this work. It is in fact the diary of my grandmother, born Elizabeth Mathew, who began it as a girl of fourteen, in 1879, and married my grandfather, John Dillon, in 1895, continuing her record till just before her untimely death (in childbirth) in May 1907, at the age of forty-two. She is for me, therefore, a purely historical figure, whose better acquaintance I am delighted to make thanks to the devoted industry of the editor, Brendan Ó Cathaoir (previously the author of a biography of John Dillon’s father, the Young Irelander John Blake Dillon).

Elizabeth was born in London in 1865, daughter of the successful Anglo-Irish barrister and later judge of the High Court James Mathew (later Sir James – whom she always refers to in the diary, quaintly, as “Monsieur”). Born into a Catholic family (his uncle was the apostle of temperance Fr Theobald Mathew) in Lehanagh, south of Cork City, Mathew came, via a classics degree from Trinity College, to the Inns of Court in London and quickly made a name for himself, particularly in the area of commercial law. Elizabeth grew up as the eldest of five children in a privileged and intellectually stimulating environment, where lawyers, judges, literary and scholarly figures, and a scattering of Liberal politicians, came to dinner or tea more or less every week. There were frequent balls, weekend excursions to country houses and holidays in Folkestone (where her mother’s family came from) and other parts of Britain, the continent and Ireland, which she grew, over the 1880s, to love and to regard as her true homeland.

The editor, in his fine introduction ‑ which makes use Elizabeth’s correspondence and of a most affecting memoir of her last illness and death composed, for his own consolation, by her distraught husband ‑ provides the reader with an excellent and much-needed guide to the riches contained in these 700-odd pages, accompanied by sage reflections on what made young Bessie Mathew tick. Her Catholicism was of great importance to her, though it was of a joyous rather than a repressive kind. She loved going to almost daily Mass (twice on Sundays!) as well as weekly confession (the mind boggles at what she found to confess) at Newman’s Oratory – the cardinal was a friend of the family, as were most of the clergy who manned the Oratory, and they often come to dinner. What I find intriguing, though, in the London of the 1880s is the apparent lack of prejudice against Catholics in the society in which the Mathews moved; the great majority of those who came to dinner, or who invited Bessie to parties or balls, were not Roman Catholics, and nothing seems to be made of the religious distinction. Further, her mother, Elizabeth Biron, was the daughter of an Anglican vicar, and was happy to convert, yet still remained on excellent terms with her family, including her brother, who was also a vicar. Sir James himself was the first Catholic to be raised to the Court of Appeal since the Reformation; his good friend Lord Russell of Killowen became the first Catholic attorney-general in 1886 and lord chief justice of England in 1894.
But that is a not a major theme of the diary. What it is all chiefly about is the coming of age of an intelligent, serious-minded and intellectually inquisitive girl who engages in the study of French, German, Italian, history and art history, even taking lectures in University College, London (though not a degree, that not being then permitted), but who also progressively discovers her identity as a patriotic Irishwoman, making the acquaintance of many members of the Irish Party (notably James Carew, the William O’Briens, TP O’Connor, and later, Michael Davitt), and ultimately marrying the man who became leader of the Irish National Federation, the main anti-Parnellite bloc of Irish nationalist MPs in the middle 1890s.

Indeed, the core of the diary may reasonably be regarded as being the period running from 1886, in the autumn of which year Bessie first met John Dillon in person, to the autumn of 1895, when she finally got him to the altar – the long delay being caused not by any lack of affection on his part but by his deep uncertainty as to whether he could offer her a decent and secure lifestyle. For one thing, he felt that he should pledge to his father-in-law, after his engagement that he would do all in his power to stay out of jail.
This core comprises eleven chapters (Ó Cathaoir having helpfully divided the text into sections, most, though not all, covering a year of narrative), and takes up some 415 pages of the total. Bessie wrote and wrote, often reproaching herself for missing a week or so, but then fully catching up, and exhibiting many moments of sparkling wit and shrewd observation of her fellow humans. A central theme, of course, especially over the years 1889-91, is the fall-out from the O’Shea divorce trial and the Parnellite split, where – despite her earlier hero-worship of Parnell (a lovely account of having tea with him at a meeting of the Eighty Club occurs in an entry for March 11th, 1888) – she has no tolerance for his clinging to power after the O’Shea divorce case and completely backs Dillon and William O’Brien (who, with his wife, Sophie, were good friends), though she stops short of approving of Tim Healy.

Some examples may be in order to illustrate the quality of her writing. Let us take first her description of her first view of Killiney (Sir James had rented Killiney Castle for their summer holiday of 1886):

The loveliness of our surroundings defies description. As I write, the evening sun, making the sea silvery blue, is sending golden lights on the hilltops and purple shadows beneath. The curve of the bay, with Bray Head as its culmination, and the Wicklow hills undulating towards infinity, make a picture more beautiful that anything I have ever seen.

This was to be the beginning of a long love affair with Killiney, and with various of its inhabitants, most notably Murrough O’Brien and his wife, Nell, at whose house she finally met her hero, John Dillon:

And now to tell of our meeting with “our languid hero” as Mrs O’Brien calls him. Well, he is the first person who has awed me. I feel quite equal to keeping up a conversation with all the Bench of Judges and any number of Lord Chancellors, but Mr John Dillon makes me feel what a poor dull miserable thing I am after all. His appearance is very striking, but that is not the point on which I dwell. There is a je ne sais quoi of earnestness and majesty about his whole demeanour the like of which I have never met. His manner is quite different to anyone else’s; he evidently does not care a bit whether people are impressed with him or not, nor does he desire to make himself agreeable to them.

He knows about everything, but does not start a conversation on anything; we did not refer to a single subject last night on which he could not give the fullest information – who wrote a book, what opera a song came from, the climate of a foreign country, the different dialects of Italy, the peculiarities of American speech, the resources of the colonies, statistics of every kind; and then at last he began to tell us about the evictions on the Clanricarde property and the history of the landlord oppression in that part of the country, and then his eyes glistened and his voice rose to that softly-eloquent tone I have heard in the House, and we listened quite breathlessly – he had quite ceased to be “languid” then.

When I read what I have written it seems as if I have been rather carried away by admiring enthusiasm, but that really is not so. Only I have never seen anyone so altogether remarkable and unlike ordinary beings. Today, when he and Mrs O’Brien and Eoghan came to lunch, he seemed very glad to talk about prisons and sentences and such questions with Monsieur, and I of course took only a listening part. Indeed, Mr Dillon with all these charms that so attract ladies, seems to be anything but a “ladies’ man”. I doubt whether he can ever have condescended to care for anyone, and as for the story of a broken heart I certainly don’t believe it. 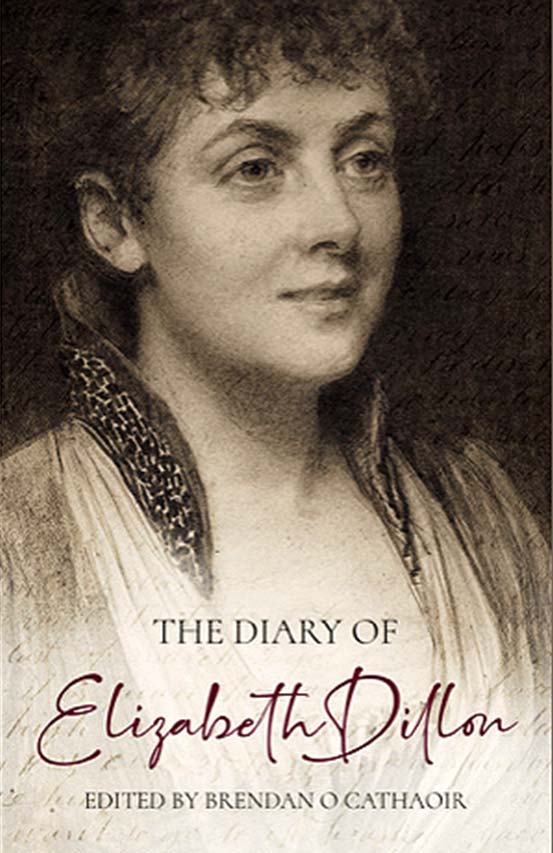 This encounter did indeed give a different impetus to her life, even if she is unwilling explicitly to admit it. Dillon became a fairly regular feature at the Mathew dinner table when in London (and not in jail, or travelling abroad to raise money for the Plan of Campaign), and a considerable understanding grew up between the pair over the following years, until in the summer of 1895 matters came to a head. We know what transpired not from the diary, where a prudent silence is maintained, but from her correspondence, which Ó Cathaoir uses to good effect in the introduction. Prompted by naggings from Nell O’Brien she wrote to Dillon, saying that things could no longer go on like this, and they must come to some conclusion, or no longer see each other. This – with some strategic prodding from Dillon’s cousin, Anne Deane (another remarkable woman) – brought the Patriot finally to the altar. A discreet note occurs in the diary for Friday, October 11th: “This afternoon John Dillon told me that he cared for me. We hope to be married, please God, next month, I cannot write about what is so sacred, but joy, awe and thanksgiving overwhelm me.”

And so began twelve years of happy married life, though punctuated by the strains of having six children, and the sorrows of parting when John was in London, or even further afield, and Bessie had to choose between the household in North Great George’s St and the pleasures of being together in London. The diary becomes inevitably somewhat more irregular, but bulletins continue until the final entry from London, on December 10th, 1906, where she is complaining of bronchitis, and of the Tories’ interference with the Education Bill. The whole vast work ends, rather characteristically, as follows: “John is well, thank God, though there is a great deal of influenza about – and the children [back in Dublin] are all well. How glad I shall be to be back with them all. But I am happy too, in not having to leave John too long alone. Stephen Gwynn made a very successful maiden speech on the Irish Tenants Bill, and seems to be taking very kindly to parliament.”

All in all, Brendan Ó Cathaoir must be credited with a marvellous achievement in the careful editing and copious annotation of this extraordinary work, most effectively offering us “a gateway into the otherness of the past”, but also into the intimate thoughts and observations of a truly remarkable young woman – who might, in happier circumstances, have become our own first First Lady. –  John Dillon

For more about this title, see:  Currach Books, Ireland