P.S. Look out for snakes

“A beautiful memoir and tribute to them both.”
Miriam O’Callaghan

“A warm, charming and very readable book which captures the mood of the 1950s.” – Maurice Manning

Brian Farrell (1929–2014) was one of the most respected broadcasters and academics of his generation, known and loved for his coverage of current affairs on RTÉ. The woman behind Brian’s public figure was Marie-Thérèse Dillon, with whom he enjoyed a long and happy home life along with their seven children.  In 1954, when Brian travelled to Harvard to complete his Master’s degree, he and his then fiancée Marie-Thérèse wrote to each other on a daily basis. Their correspondence makes up this absorbing and special book, edited by the couple’s daughter, Miriam.

The letters not only provide a personal insight into a unique Irish couple at the beginning of their life together but are also a real-time commentary on social and political life in both Ireland and the United States in the mid-1950s.  Brian Farrell writes of the political contrasts of an idealistic post-war America also at the height of the McCarthy era. Marie-Thérèse’s letters discuss an Ireland slowly becoming a modern state and where their future may or may not lie. In between, they reflect on the personal challenges of their young lives, and swop vital news of friends and family.

The joyous anticipation of the couple as they count down to the bride’s arrival in New York for a Spring wedding is fond, witty and often hilarious. Full of charm and always eloquent, P.S. look out for Snakes will not fail to delight any reader. 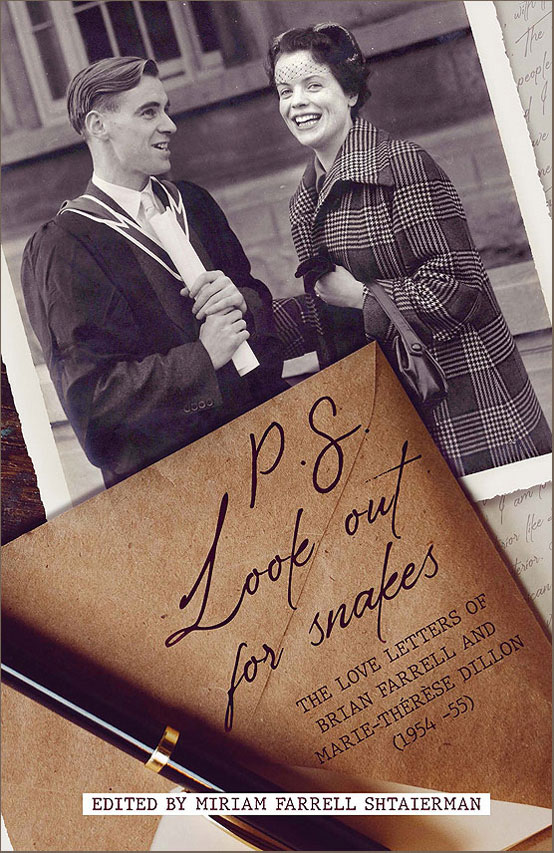 P.S. Look out for snakes is available as a paperback from most international bookshop websites, see:

Ask in person for a copy at your local bookshop, which will get it for you by special order through Gardners or Ingram suppliers,
or request a special, signed edition directly from the author by writing to:  info@katouniapress.com

LISTEN TO THE AUTHOR INTERVIEWED BY PAT KENNY ON NEWSTALK HERE