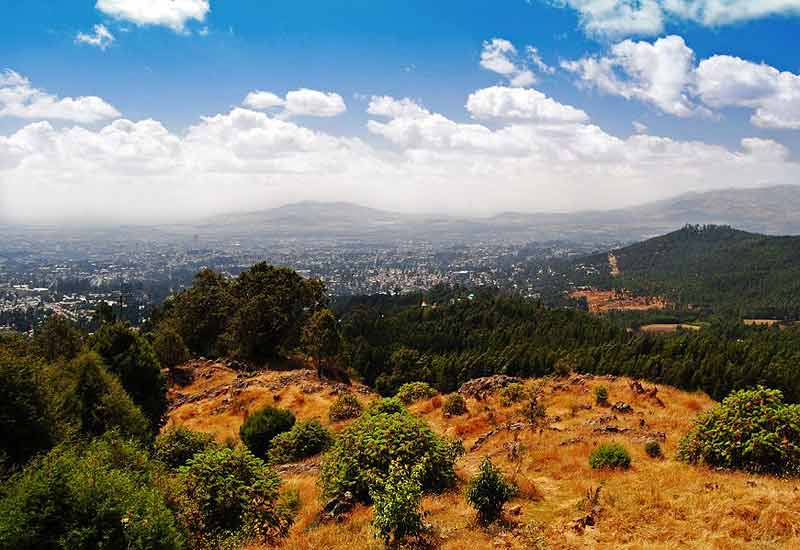 John Dillon is an author and Regius Professor of Greek (Emeritus) at Trinity College Dublin, where he has taught since 1980. He was previously a member of the Classics Department at the University of California, Berkeley, from 1969 onwards. Over the course of his career, Dillon has written and edited many academic works, including The Middle Platonists (1977/1996), Salt and Olives: Morality and Custom in Ancient Greece (2004), The Heirs of Plato: A Study of the Old Academy (2005) and The Roots of Platonism (2018).

After graduating from Oxford in the early 1960s, Dillon spent some time teaching English in Addis Ababa, Ethiopia. It was an influential period which later inspired his debut novel, The Scent of Eucalyptus, a delectable coming-of-age story that’s thematically reminiscent of Evelyn Waugh’s Brideshead Revisited. Originally published in 2006, this gem of a book has found a new lease of life with 451 Editions. Dillon’s empathetic protagonist, Luke La Touche, is a young Oxford graduate who, rather than do what’s expected of him, rebels and runs away to Africa in search of adventure. Taking up an English teaching position with only his influential cousin James for guidance, he samples his new home’s local delights, falls in love, begins playing with a jazz band in a local club, and quickly becomes immersed in an expat community in the last throes of the colonial era.

In a riveting twist, Luke is also intrigued and slowly drawn into the dangerous world of flamboyant aristocrat, Yohannis, his former classmate from Oxford, who we learn is part of an emerging new generation. Dillon’s beautiful descriptions paired with his wry humour, which flows on the page, gives us a real flavour for 1960s Ethiopia on the brink of change as Luke La Touche’s world, in turn, is transformed.

Nobel Prize winner Seamus Heaney once said of The Scent of Eucalyptus – “The cast of characters – the denizens of the local scene – are wonderfully observed. Ethiopia too, as landscape and history, is solidly ‘there.’”  John Dillon lives with his wife in Howth, Dublin. He is currently working on his next project. 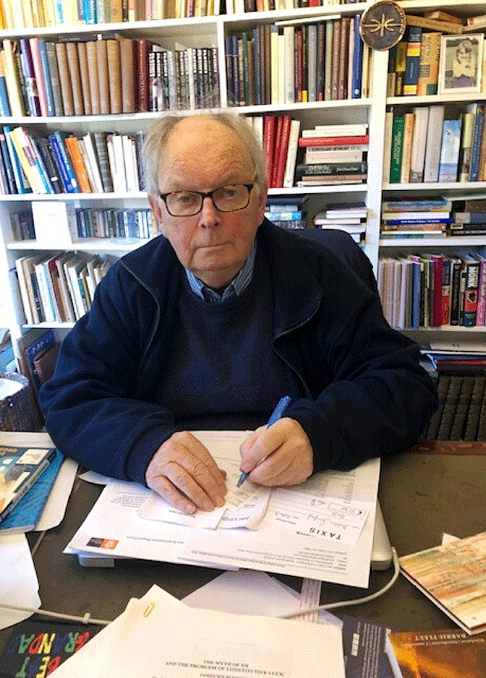 On home
My wife Jean and I live currently on Howth Head, having moved from the family home in Portmarnock back in 1992. What I particularly value about the area is that one can walk out of one’s front door, either up onto the hill or onto the cliffs, without having to get into one’s car, and commune with Nature to one’s heart’s content. We have a little shop up the road, and an excellent pub, The Summit Inn, which also serves fine food. So we are largely self-sufficient. And Howth village also provides many facilities.

On roots
I was born, in fact, in Madison, Wisconsin, in the mid-west of the U.S, where my father held the position of Professor of Celtic in the local university. We returned to Ireland, however, in 1946, when I was seven, and settled initially in a small estate in Meath, near Athboy, beside the home of our cousins, and lived there for a few years, until moving to near Dublin, in Raheny, when my father took up a professorship in the Institute of Advanced Studies. From Wisconsin, I remember only the highly-polished floors of our house, which I slid along on my bottom, our dog, a black Labrador called Annie, big snow-drifts in winter, and a summer trip to Lake Michigan.

On early reading
My father read to me, and so did my grandmother, when she lived with us for a few years in Madison before her death. I can’t recall anything remarkable, just fairy stories and the like, My father did tell me Irish folktales, though, and he told them very well, having recorded many himself from notable seanchais. And I remember going around with the newspaper under my arm, pretending that I was reading that. The house was always full of books back in Ireland, dating back to my grandfather’s time. And my father knew many writers and poets, of whose works he had signed copies.

On family
I didn’t make any use of the Dillon tradition in the novel, I must say, but I borrowed my mother’s family name, La Touche, to characterise the oddness of my hero in the novel; and certain features of our homes in Meath and north county Dublin, in memories of his family home in Wicklow. On the other hand, I have both read and written quite a bit in articles about the Dillon family, going back to my great-grandfather, John Blake Dillon, who was one of the Young Irelanders “out” in 1848; and I have edited the letters of my father when he was a graduate student in Germany in the early 1920s, which are most entertaining – to me, at least.

On creating
I write generally at my desk in my study – a rather ornamental desk, which was presented to my grandfather by the grateful Nationalist citizens of Liverpool back in the 1890s! I have a window which looks out onto our back garden, from which I can observe the goings-on of our birds and squirrels, while I am thinking out the next move. I am surrounded on all sides by books, many of which, alas, are still unread, in whole or in part! And the remaining wall is filled with pictures and cartoons of various of my ancestors.

On independent bookshops
I am particularly attracted, I must say, in town, to Books Upstairs, and its highly literate and hospitable proprietor. I find it difficult to get out of it without buying a book. Similarly, our local bookshop in Sutton, The Book Haven, which, while doing what it has to do to survive, sports a very intelligent selection of books of both Irish and general interest. I also make pretty regular use of Hodges Figgis, which is adjacent to the College, on Dawson Street.

On his “To Be Read” pile
Well, I regret to say there is rather a large pile. I keep getting distracted from what I am reading by some new arrival. I will exclude from this list works on ancient Greek philosophy, which primarily concern me, but which would be of no interest to the general public. Otherwise, though, I am currently working my way through the excellent biography of Gladstone by Colin Matthew (Oxford 1997), which happens to tie in rather well with the recently published diary of my grandmother Elizabeth Dillon. Then, I am also engaged in finishing off Evelyn Underhill’s excellent study of Mysticism, which I should have read long ago, as it is a subject which much concerns me. As for novels, I have currently lined up Mary O’Donnell’s The Light-Makers, having just finished her intriguing Elysium Testament, which had been waiting to be read for a while. I always like to have a book of poetry in hand, and at the moment it is Paul Muldoon’s Hay – which is in truth a rather eccentric volume, but none the less entertaining for that!

On escape
Fortunately, I have no need to escape from the pattering of little feet, or suchlike. But I do like to retire to my study, or, in good weather, to the patio in our back garden, and meditate awhile. We do also have a favourite corner of Greece, in the north-west of the island of Euboea, which we like to retire to for a few weeks at a time, though that is becoming more difficult with advancing years.

On The Scent of Eucalyptus
Well, for decades I had had it mind to celebrate in some suitable literary way that curious segment of my early life, but it really remained a dream until, following on a heart attack back in early 1995, I was banned by my dear wife from doing any academic work for about six months, and in this vacuum I started in on the novel. When I got going, I wrote in a kind of trance, conjuring up the sights, sounds and smells, and the remarkable individuals, of the Ethiopia of the early 1960s. But it was still quite a slog, and I retain a great admiration for anyone who manages to complete a novel, no matter of how low a quality! Things like maintaining consistency can be quite a problem, for one thing.

On Seamus Heaney
We had been friends of Seamus and Marie Heaney ever since they came to the University of California at Berkeley (where I was then teaching) for a year in 1970-1, and we stayed in touch ever after, getting together when we came home for the summers all through the 1970s, and then more regularly after my return to Trinity in 1980. When the novel finally appeared in its first edition in 2006, I presented Seamus with a copy, and he very kindly wrote a warm and good-humoured appreciation of it, which my new editor, Helena Mulkerns, decided to use in part, to endorse the new version.

As for memories, there are a great many happy ones, but I might mention just two off-hand. The first is of our standing one afternoon in the garden of his Wicklow cottage, Glanmore, some time in the late 1970s, after he had decided to resign from his position in Carysfort College and launch out as a full-time poet. I recall him shaking his head a bit ruefully, and remarking, “I never appreciated before now the beauty of the monthly cheque!” Happily, however, he survived very well! Then again, also from the late 1970s, when he was back in Berkeley for a term just by himself, we saw a lot of him, and on one occasion took him up with us for a weekend to a cabin in the Sierras, on the shore of a small lake south of Lake Tahoe, that we had borrowed from a friend. At one stage, I was trying to get him to come for a walk, but he was situated too comfortably on the veranda, and not inclined to move.

“Come on, Heaney,” I said. “You’re a nature poet, after all, and there’s a whole lot of nature out there!”
“I am not a nature poet,” he grumbled. “I hate nature! I only use it as a source of tropes.”
So that put me in my box. And I actually think he is right about that.

On what’s next
Well, I have a number of academic projects still on the stocks, and ideas for a number of novels – one a historical one, about the founding of what was my prep school, St Gerard’s School, Bray, in the midst of Ireland’s Civil War period; another about life in 1960s Berkeley; and yet another, satirical, one about recent developments in Trinity College – but I would probably have to have another heart attack, and survive it, to see any of those projects to fruition.

Read the full interview in The Gloss.ie  here