Flood the Sahara! A Contribution to Saving the Planet 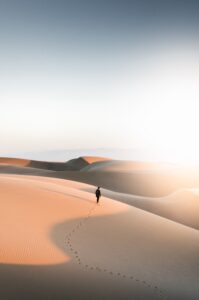 The recent dire warnings from the scientific community as to the threat posed to the planet by our reckless disruption of the balance of Nature by the emission of excessive greenhouse gases prompt me to revive a proposal that I made some ten years ago now (published in The Green Voice, February 2010), and which, predictably, sank like a stone. This was that we might consider promoting, through the agency of the government, and more particularly the Ministry of the Environment, two major projects, designed to re-introduce balance in areas where human activity has induced gross imbalance, resulting in alarming climatic emergencies. These will certain not solve the whole problem, but they might help to some degree.

My first proposal is that we should promote a major pan-European initiative to flood the Sahara Desert – or rather, to re-flood it, since it used to be largely under water around 10,000 years ago, and was a rather green and verdant place, at the time of the last Ice Age. For such a project, a series of vast pipelines, with pumping stations (necessarily, powered by renewable energy) would be needed, coming in through North Africa (across the Atlas Mountains), and pumping water into low-lying depressions within the great desert.

That would be salt water, of course, and, as such not much use for drinking or irrigation of crops, but some of it could be desalinated, if desired, and it could, even as it was, be used for growing a variety of plants (known as halophytes), which can be used for bio-fuel, and even for animal feed. Above all, though, such a visionary move would achieve two goals: first, it would take some of the pressure off the Atlantic, the level of which is predicted otherwise to rise around two metres in the next decade or so, owing to the melting of the ice-caps, thus inundating many coastal communities; and secondly, it should produce a benign effect of the sub-Saharan region (the Sahel), which is currently, as we know, ravaged by ever-increasing drought.

Now we cannot be quite certain, I grant, what the presence of a large body of water in the middle of the Sahara would do to the weather, but the strong probability is that it would stimulate rainfall further south, since the prevailing winds in that region are north-easterly. If the argument is put forward that this constitutes a serious interference with the ecology of the region, I can only reply that we have interfered with it so much already that we could hardly make things any worse, and we might well make them a great deal better, for a change.

This will all be initially extremely expensive, of course (though certainly not more so than the current on-going conflicts in Iraq and Afghanistan), and may sound absurdly utopian, but it is certainly no dottier than another grand plan being currently touted in the EU, which is to build a vast series of solar panels in the middle of the Sahara, to provide much of Europe’s electricity. That can be done too, of course, but it does not preclude flooding parts of the area as well. Indeed, it could provide much of the energy  for such a project.

My second proposal is on a slightly less grandiose scale, but still encompasses a major infrastructural project. By running a series of pipelines, in imitation of the vast ones that currently carry gas, and more recently oil, from the depths of Russia all the way to Western Europe, from Northern Europe (including Ireland) to Southern Europe, we can relieve both our water surpluses and their persistent droughts. Although this, once again, is an enormous project, it is not dissimilar in scale to the pipelines which currently bring oil from Siberia to Germany, for example.

Of course there would be a significant charge for this, so that the export of water would ultimately become a significant money-spinner for such countries as our own. It is all very well for us in Northern Europe, after all,  to go seeking the sun in the countries of the Mediterranean littoral, but it far less fun for those who live there permanently to be faced with the emergencies that currently afflict them. The constant anxiety about water is something that plays continually on the minds of the inhabitants of that area, and even when the rain comes, it is frequently in the form of a sudden downpour that can do more harm than good. If only the region had access to a steady source of water for irrigation and basic hygiene, what a paradise it would be!

A properly constituted  European Water Authority would need to guard against  immoderate growth resulting from the ready availability of this basic resource, but one would hope that Europe has learned its lesson by now. There would have to be strict control on further developments, and stern punishment for corruption – ultimately, by cutting off the water, even as Russia threatens from time to time to do with the gas to Ukraine!

Both of these proposals, I realise, are enormous tasks, but if we are to survive as a species, never mind as a nation, we are going to have to think big, and not hesitate to act. Those who may be disturbed by the thought that we will thus be interfering in a fairly radical way  with the global environment should reflect that it is largely our past reckless interferences that have got us into our present crisis, and it can now be the role of judicious interventions to get us out of it.